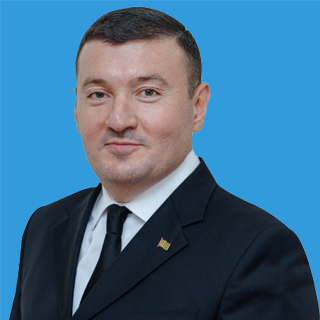 Maksat Pirliyev graduated from Turkmen State University named after Makhtumkuli in 1999, majoring in world economy and international relations. From 2000 to 2008, he worked at the State Commercial Bank of Turkmenistan "Daykhanbank" as a specialist, chief specialist and chief accountant. From October to December 2008, Maksat Pirliyev held a position of Chief Economist - Head of the Audit and Economic Department at the Joint-Stock Company "GEK Gushak". March - July 2009, he worked as Chief Accountant in the Abadan branch of the State Commercial Bank of Turkmenistan "Halkbank". From 2009 to 2016, Maksat Pirliyev held several positions as: a leading specialist of the Economic Analysis Department at the State Agency for the Management and Use of Oil and Gas Resources under the President of Turkmenistan; head of the European Representative Office; leading specialist of the Nebitdag department; Head of the Toplum-21 department; Head of the Nebitdag department. From 2016 to 2018, he worked in the "Nebitdag" department of the central office of the State Concern "Turkmennebit" as the head of the "Nebitdag" department, as well as deputy Head of the Department for Production Sharing Agreements. Since August 2018, he has been working as the General Director of the Closed Joint-Stock Company "Turkmen National Petroleum Company".